“Thanks the party and the government for remembering our veterans.” Recently, 95 year old veteran Wang Bixing received the medal commemorating the 70th anniversary of the war against U.S. aggression and aid Korea

It is reported that Wang Bixing, born in May 1925 in Yidushui town, Xinning County, is the oldest veteran registered who fougth against U.S. aggression and aided Korea. In order to commemorate the 70th anniversary of war against U.S. aggression and aid Korea, the staff of Yidushui veterans service station came to the Wang’s home to learn about his recent situation, and issued commemorative medal to him. 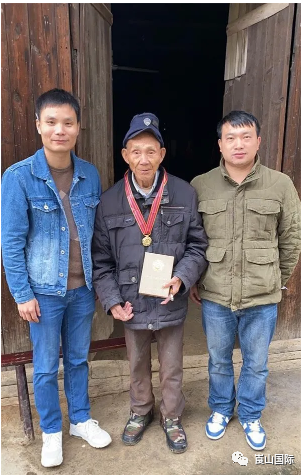 “My father was an artilleryman before he retired from the army. He would talk to us about his glorious deeds in the army. We are proud of him.” Speaking of his father, Wang’s son is very proud.